Circa 1878 J B Beha 8 day going cuckoo clock with music box operating on hourly strike. Pencil marked information on the pine back board suggests it could have been allocated the catalogue number of 548, but this is an unconfirmed assumption.

The clock is over 28 inches tall and therefore one of the largest table/ bracket clocks manufactured by the factory. The case is veneered in burr walnut and is adorned with carved walnut friezes which seem armorial/ heraldic in the case of the large bottom frontal example. There are superb ebonised mouldings separating certain areas of the case which provide a nice contrast to the rich brown burr walnut. The clock has strike and silent options via a side operators door to turn on and off both the spiral gong and the cuckoo sounding. The very large 8 day double fusee movement has an elaborate network of pipes for the cuckoo sound. The movement is completely original and operates perfectly, including music box operation on the hour. It simply strikes one cuckoo on the half hour.

The dial has immaculate enamelled cartouche numerals attached to a honey coloured wood dial surrounded with a gilt rimmed and glazed dial. There are a pair of intricately carved bone hands in a "arrow pointer" design. The cuckoo bird has the normal articulation of wings, body and beak and is very plump with original decoration and no paint losses. The pendulum is a brass lead filled bob version on a strip brass adjustment rod with bottom screw.

The clock runs very accurately indeed, which is not surprising given its size and the quality of engineering involved. The music box is the largest I have seen in a clock of this type and was manufactured by Paillard and imported from Switzerland for customer ordered clocks requiring this complication.

There are 8 airs which can be selected to play just one tune, or on a sequential rotation of all 8. The airs are William Tell overture theme - Rossini, Mazurka, 1001 nights waltz – Strauss, Tannhauser march – Wagner, Cloches de conville waltz , Carmen – Bizet, Waltz des Traineaux, BalladeThe box is attached to a 21 inch bed which slides into the case on dedicated rebates proving the two have always been together. There are 93 teeth on the com. The entire MB has been professionally stripped down and re pinned and polished by one of the world's leading technicians in the field. In some of these examples the strike trigger linkage can be variable to start MB after cuckoo, but not this clock.

The movement has been lightly cleaned and oiled and adjusted and now operates absolutely perfectly every time. The condition of the case is quite stunning and would grace any quality environment. It has been well looked after and would have been a very expensive piece originally. It has been suggested it would have been built by Rupert Wehrle, but conclusive information is hard to establish.

The clock is wound via the dial arbours, the MB has a side crank aperture to access the box and on the other side there is a hole which enables a pull repeat to operate the MB on command. This feature is most unusual on a black forest style clock and is probably there to mimic English and French clock refinements. A very rare clock and the only one of this precise style I have ever seen.

The clock was acquired from Austria and was said to have been in the ownership of a wealthy Italian family many years before this. 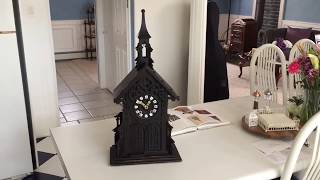 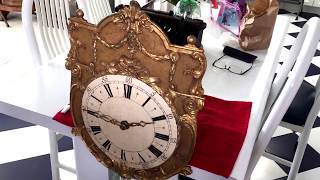